MCDB 109L Biochemistry Laboratory is an intensive laboratory experience intended for students majoring in Biochemistry-Molecular Biology or other related majors. This course was recently revised to introduce an authentic research experience as part of the HHMI-funded program at UCSB.
Alzheimer’s disease (AD) is defined by the appearance of b-amyloid senile plaques composed of Ab peptide and, secondly, neurofibrillary tangles generated from the abnormal self-aggregation of tau.  While the plaques are known to develop before the tangles and therefore likely initiate the disease process, it is the neurofibrillary tangles that correlate most closely with neuronal death and the severity of Alzheimer’s disease.  Neurofibrillary tangles display two hallmarks:  they are highly insoluble, and they are abnormally hyperphosphorylated at multiple sites on the tau protein   Hyperphosphorylated tau is a hallmark of AD, therefore the conjectured role of this phosphorylation in neuron death is essential to investigate.  One of the primary enzymes responsible for tau hyperphosphorylation is a serine/threonine protein kinase, CDK5/p25.
In vitro, full-length human tau aggregates extremely slowly, but an N-terminally truncated tau mutant, tau187, aggregates rapidly to form tangles identical to those formed by full-length tau.  In addition, the phosphorylation of human tau or tau187 by CDK5/p25 in vitro proceeds poorly.  Therefore we have employed tau187 that has been further engineered to achieve optimal phosphorylation by CDK5/p25 vitro.  Using this as a model system, students will test the role of phosphorylation on tau aggregation hoping to shed light on the molecular mechanism of AD progression. 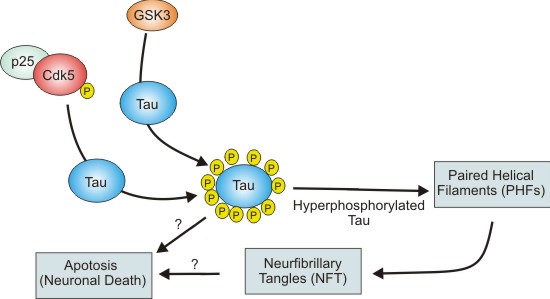 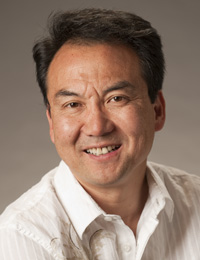 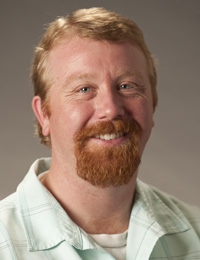